One of the challenges with web-based development is that the delivery mediums are developed by many and are constantly changing. These mediums typically come in the form of desktops, laptops, tablets, and smartphones. This not only makes development a challenge (as a website should have a responsive design), but also testing across the many browsers, versions and devices. This article will help you determine what to test, why, and some tips for making the most of your testing.

Few of us have unlimited budgets and time, so we need to make smart decisions when it comes to our testing. When trying to decide which browsers you should test your site on to get the most bang for your buck, you should consider several factors:

For these stats, I’m focusing on the U.S. region, but this reference site is also helpful to see worldwide stats. You can also slice and dice the data many different ways.

Let’s start by considering the breakdown of Desktop vs. Mobile vs. Tablet. 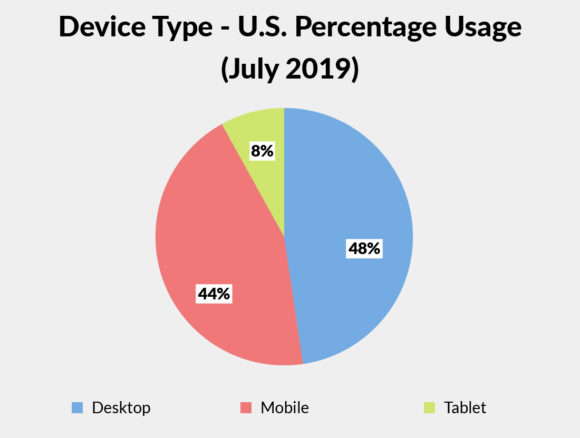 Globally, mobile (smartphone) viewing of web content is greater than 50% and has surpassed desktop viewing. However, in the U.S., desktop viewing is around 48% and mobile is around 44%, which is still significant. Tablet web viewing has been flat for the past year at around 8%. Now, it has become just as important to test on mobile as it is on desktop.

Next up, we need to know which are the most used browsers today and how many of those we should prioritize when testing. 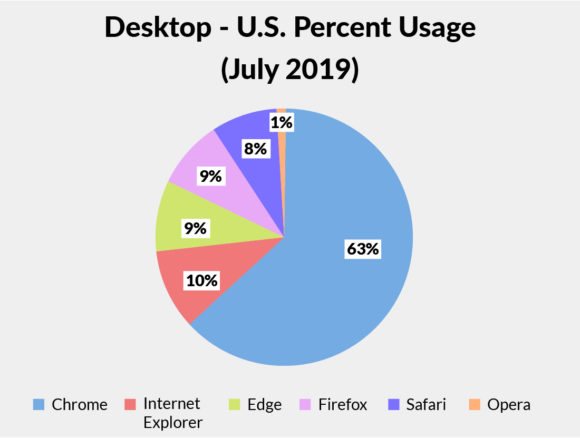 The dominant browser for desktop is Chrome with over 60% usage, followed by Internet Explorer (IE) at 10%, and then Edge/Firefox/Safari all in the 8.5% – 9% range. 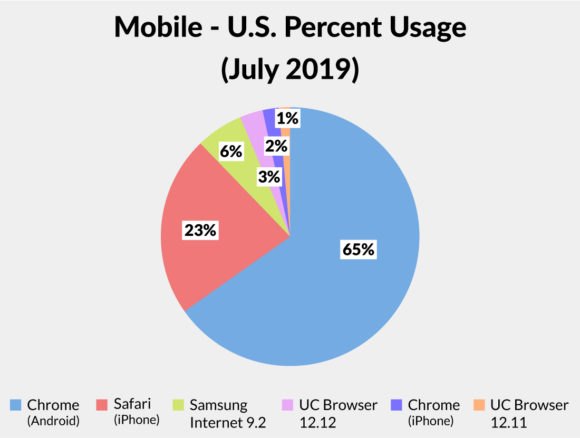 For mobile, almost 90% of the browser market is captured by Chrome and Safari.

While these stats above cover the broader U.S.-based population, it is very important for you to look at your own website analytics (i.e. Google Analytics) to see if your website visitors have any unique browser usage that should impact your testing. Some companies may have a designated browser for internal use (i.e. Internet Explorer – sorry ☹) so your testing plans may need to be adjusted to meet those needs.

Armed with all of this data, now we need to decide which browsers/versions to test. Chrome is a no-brainer as the world’s most-used web browser (growing rapidly since its launch in 2008), but how should you divide your time between the others?

Based on desktop usage in the U.S., IE is the next highest at 10%. However, IE requires special consideration and I’ll discuss that more in the next section.

Edge and Firefox, coming in at 9% each, seem to follow the same general trends as Chrome in terms of how they handle the ‘newer web standards’ and should be included in your testing.  As a result, it is likely that if a website works in Chrome, it should work in Edge and Firefox as well.

With the launch of Microsoft’s newest browser, Edge, in 2015, Internet Explorer has been – for all intents and purposes – left in the dust.

“… Internet Explorer is a compatibility solution. We’re not supporting new web standards for it and, while many sites work fine, developers by and large just aren’t testing for Internet Explorer these days. They’re testing on modern browsers.”

So, considering Microsoft’s stance on its own IE browser, it is not a prioritized browser for Media Genesis to use for testing.

Now you have a better feel for which browsers need testing. For Media Genesis projects, we use a minimum standard for our testing which includes:

Beyond these standards, client/project-specific needs will determine the breadth and depth of our testing.

You now know which browsers Media Genesis prioritizes to test, so let me share some testing tips and suggestions. With over 34 years of doing software development testing, here are some foundational principles I like to follow:

For software development and website testing, you need to make sure you allocate plenty of time during and at the end of the project. Also, remember when you transition your site from Development to Staging to Production, you will need to retest. There will be typos, errors, and issues in your code. It’s your job to catch them before others do.